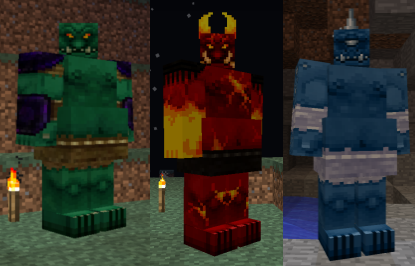 Ogres are large mobs introduced into the Yogbox by the Mo' Creatures mod, and they have a rather nasty ability; they can destroy blocks. They smash with a level of strength that varies according to each type of Ogre and that can be edited by through the Mo' Creatures GUI. Ogres are twice the size of the player, and are very dangerous due to their long reach. However they can be quickly dispatched with a bow and arrow at a safe distance or taken on with a sword, as long as the player keeps his wits about him, or at least the high ground. Be wary of collateral damage inflicted upon the terrain; a hole in the ground could prove deadly should you get caught in it with low health, and so would a broken wall of your house. Critical hits should be absolutely be attempted to quickly finish the fight. Keep a wary eye on your health bar, since Ogres pack quite a solid punch, even through armor.

Ogres spawn at night, and seem to do so more often around villages. They often accompanied by a Werewolf or other mobs, including other Ogres. They will also spawn randomly around the world in the same fashion or on their own.

Common Ogres drop Obsidian upon death. They are a deep shade of green.

Fire Ogres have a greater area of effect than the Green Ogre, and can sometimes cause nearby blocks to catch on fire when they smash. Upon death, the Fire Ogre drops Fire, providing yet another way of making Chain Armour with the Mo' Creatures.

Cave Ogres only spawn underground in dark caves and have the largest AoE of all the Ogres. They sometimes drop Diamonds, making them much more rewarding than the Green Ogres. Remember, however, that they are also much more dangerous, as they will likely be harder to flee from if things go wrong, and that it is possible for them to send you into lava by knocking you back or destroying the blocks underneath you.

Retrieved from "https://yogbox.fandom.com/wiki/Ogres?oldid=12357"
Community content is available under CC-BY-SA unless otherwise noted.